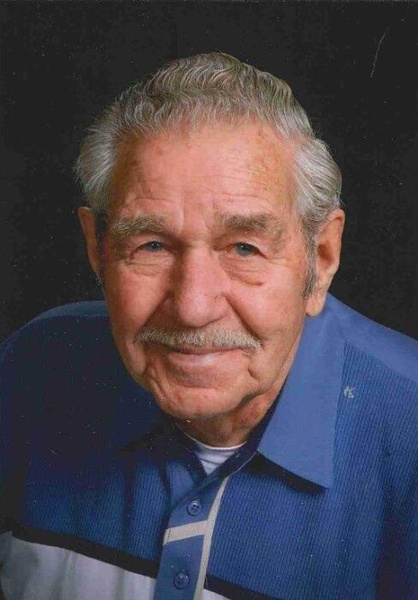 David H. “Harry” Davidson, 99 of Duluth, died Friday, Jan. 21 st in the comfort of his home. We lost our husband, father, and grandfather.  Harry was born Jan. 6, 1923, in Duluth to David M and Serena (Schneider) Davidson. He was the second born son of 11 children.   At the age of 17 he boarded the USS Paducah, serving his country from 1940 to 1945, during WW II.  Returning to Duluth after the war, Harry worked as a structural iron worker from June 1, 1946, to his retirement on Jan. 1, 1983.  In June of 2021 he received his 75-year pin from Iron Workers local 563.    Harry was a member of St. John’s Church, Iron Workers Local 563, life member of United Northern Sportsman and VFW Post 137.He enjoyed fishing, camping, hunting, and bowling with his dad and brothers.  After retiring, Harry and Toots would travel south in their RV to the warmth of the southern states.  Harry was a man of many talents, building his own home, welding, building snowmobile trailers. He could fix anything; and he always had a plentiful vegetable garden.  He was a special, loving, and admirable husband, father, and grandfather, he will be greatly missed.

Harry’s family would like thank Dr. David Arvold and the team at St. Luke’s Hospice for their loving care of our dad.

Visitation will be Thursday, Jan. 27 th from 4-6pm in the Dougherty Funeral Home.  Visitation will continue Friday, Jan. 28 th , from 10am to the 11am Mass of Christian Burial at St. John’s Church, 1 W Chisholm St., Duluth, with Military Honors following at Calvary Cemetery. Sign the online register book at, WWW.dfhduluth.com .  Arrangements by Dougherty Funeral Home, 600 E 2 nd St. Duluth, (218) 727-3555.

To send flowers to the family in memory of David Davidson, please visit our flower store.