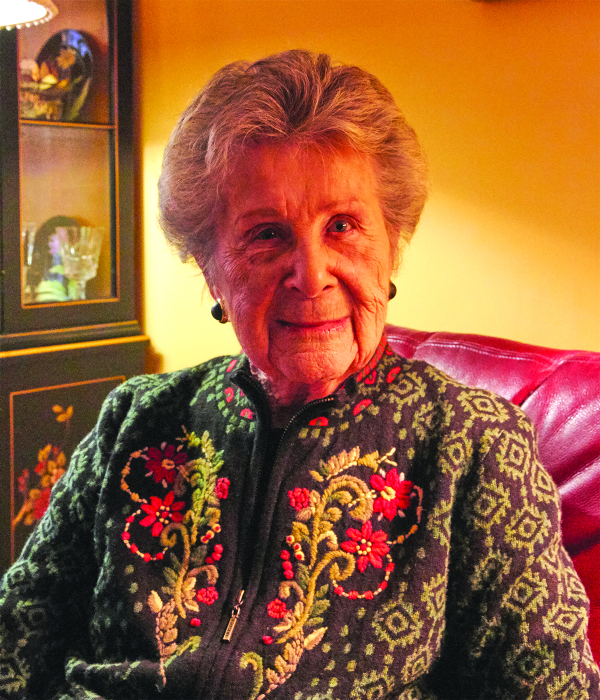 Duluth, MN – Charlotte Smith Moyer, 97, died Sunday, March 31 at Solvay Hospice House in Duluth.  Charlotte was a wife, mother, mother-in-law, grandmother, great grandmother, sister, aunt, friend, community engager, cabin entertainer, and a beautifully-stylish woman even up until her death. She had been a Duluth resident since 1950.

Born to Clarence and Blanche Smith in Minneapolis, Charlotte earned her AA Degree from the University of Minnesota, where she was a member of the Kappa Delta sorority. She worked as a young woman at Burroughs Business Machine, but that career was short lived because during a college summer break she met her soul mate and Prince Charming while working in Glacier Park at Lake McDonald Lodge. She was a lobby maid and John Moyer was a desk clerk and played in the band. Their romance blossomed later as he courted her with his letters from Europe while serving as an Army doctor during WWII.  Upon his arrival home from the war, they married on December 27, 1945.

Charlotte and John had five children, Thomas, Mary Beth, Kay, Paul and Martha and her world revolved around providing the proper guidance, education and experiences to ensure the children had successful futures. Despite their occasional groaning, she persevered. Much of their family joy in those years centered on their family cabin on Hart Lake in Iron River, Wisconsin.  There, she was the “hostess with the mostest,” entertaining their extended family and her husband’s Duluth Clinic and St. Mary’s Hospital associates. She could make a mean cabin goulash, and nobody left hungry or without the opportunity to learn to water ski or sail.

Giving back to the community was also important to her and something she instilled in her children. She was a 30-year member of the Duluth Junior League, including Sustainer of the Year; President of the St. Louis Medical Auxiliary; President of the St. Mary’s Hospital Medical Auxiliary; Re-Organizing Chair of the Friends of the Duluth Public Library; MN Heart Drive Chair; Cathedral High School Parents Council Chair; and a member of the Women’s Association of the Duluth Symphony Orchestra.  They were also long-time members of Northland Country Club and the Kitchie Gammi Club in Duluth.

When Charlotte and John retired to Sun City, Arizona golf became their passion. This was fairly new for Charlotte, and she embraced the challenge and played a decent game.  It was a great way for her to connect with new friends and engage in their new community. Even in retirement her leadership efforts continued. She served on the 18-Hole Golf Board at Palmbrook Country Club in Sun City.

She aged gracefully and was often the best dressed woman in the room.   She was also very social which kept her mind sharp and her wit keen. She managed to accomplish everything on her bucket list, along with her husband of 72 years before he passed.

Memorial donations can be made to the charity of your choice, or to one of the many that she supported: Solvay Hospice House, Junior League of Duluth, Duluth Symphony Orchestra, Essentia Health Foundation or Friends of the Duluth Public Library.

Visitation will be from 5 to 7 p.m., Thursday, May 23rd, in the Dougherty Funeral Home, 600 E 2nd St. Duluth, MN.  Memorial Mass at 11 a.m. Friday, May 24 at Cathedral of Our Lady of the Rosary 2801 East 4th Street, Duluth. If you would like the family to keep you apprised of celebration details, please email your contact info to CharCelebration@gmail.com.  Arrangements by Dougherty Funeral Home in Duluth, 218-727-3555.

To order memorial trees or send flowers to the family in memory of Charlotte Moyer, please visit our flower store.