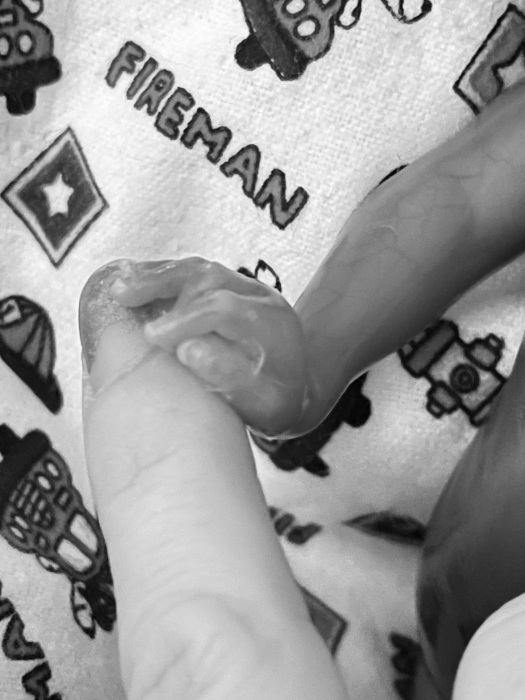 Our little angel, Calum Sutton Jamar, was called to the Lord on Saturday, December 5, 2020 at Essentia-St. Mary’s, Duluth, MN.  Although Calum did not get to spend any time with us on earth, he touched so many of our lives.

We remember Calum’s nightly tummy taps, when Dad would tap his fingers on Mom’s stomach and Calum would tap back.  The first time we felt him move, we both had tears in our eyes.  We loved him instantly.  We thought about how kind and loving he would be, when we raised him in our world.  If he was anything like his Dad, we know his heart would be like gold.  When we met him on Saturday, he was more perfect than we could have imagined.  He had his Mom’s nose, crooked pinky finger and everything else about him was his Dad.  Our hearts were over flowing with both love and sadness.

Calum was the son of Evan and Kaitlyn Jamar of Duluth, Minnesota.  He is being in held in the arms of his Aunt Grace Schradle in Heaven.  He is mourned on earth by his loving dog, Bentley; his paternal grandparents, Thomas Jamar and Cindy Jamar (Michael Amendola) all of Duluth, MN.  Maternal grandparents Christopher and Stacey Schradle of Clayton, WI.  Maternal grandparent Terry Anderson of Trego, WI.  Great-Grandparents Danny and Susan Sutton, Byron and Mary Kay Swanson and William and Beverly Schradle.  Aunts and Uncles, Kelsey Anderson (Jake Giersch), Jake Anderson (Jayden Tetner) and Sarah and Colin Davis.  As well as, many great-aunts, uncles and cousins.  And so many dear friends.

There will be a private family service held at Dougherty Funeral Home on Wednesday, December 9th at 1:00 PM.

“sometimes it is the smallest things that take up the most room in our hearts.”

To send flowers to the family in memory of Calum Jamar, please visit our flower store.