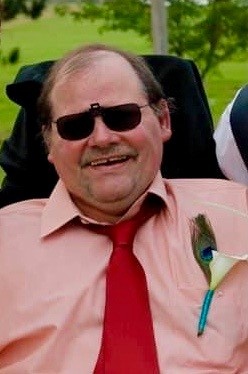 Bryan attended Hermantown and Duluth schools, and graduated from Duluth Denfeld High School in 1972.  Bryan went on to work at Hermantown High School in the late 70’s until he was hired on at Moline Machinery and worked as long as could (into the 90’s). Bryan had to stop working due to health issues and mobility complications related to his Muscular Dystrophy.

During his childhood he liked playing with his brother (Wayne) and sister (Mary) including sliding, snowmobiles and anything that had a motor.  When he was old enough to drive, he discovered cars and owned many of them thru out his life, no matter type of vehicle he had he always took pride in it.  One of his most favorite was the Ford Torino.  Bryan always had enjoyment about talking about his only son (Eric).  He always had some sort of story about him, and when that happened it always brought a smile to his face. Bryan was a caring individual and it only mattered to him that someone was caring as well. Bryan was also able to find the good in a situation and not concentrate on the hard realities of his life because of his limitations and hardships.

Because of Bryan’s Muscular Dystrophy, he resided in community living facilities and assisted living most of his adult life. Bryan moved multiple times until he found “his home” at Maple House at DRCC. Bryan loved and cared about each of the staff and other housemates and considered them his family. He died peacefully on November 28, 2020 at his home with loved ones by his side.

To send flowers to the family in memory of Bryan Goeppinger, please visit our flower store.