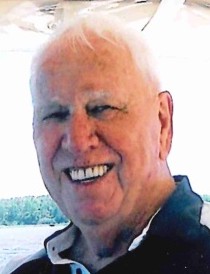 He enlisted in the Army during WWII.  Upon leaving the service he drove an Ambulance and worked at St Mary’s Hospital. Bernie then started in the car business.  He became sales manager at Plaza Dodge which he eventually bought and retired from in 1992.

He belonged to the Lake Ave Loafers, Arrowhead Civic Club, and the Duluth Power Squadron.  He loved his Harley hill climbing days, was an avid boat enthusiast spending time on his boats his last being the Dodge Buoy.  Most importantly he was a kind, generous and loving family man who will be sadly missed.

He was preceded in death by his parents; wife, Floy Jeanne; brother, George, Bob, and Jerry.

Bernie is survived by his daughter, Barb (Bud) Didrikson; son Bruce (Jeanette Vogel); and other family and friends.

The family would like to give a special thanks to the owners and the staff at BeeHive Homes, and St Luke’s Hospice for their attentive care of Bernie.

In lieu of flowers memorials can be directed to BeeHive Home in Duluth.

To order memorial trees or send flowers to the family in memory of Bernard Beatty, please visit our flower store.