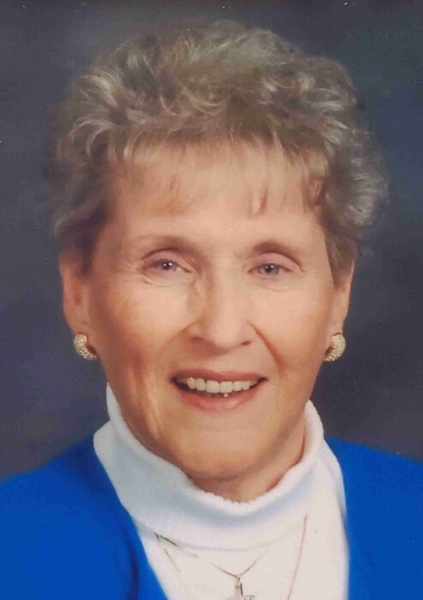 Barbara Jane LeBeau Coffin, 90, of Duluth, passed away surrounded by her family on August 21, 2021. She was born to John Earl LeBeau and Leona Belle Heller LeBeau at St. Mary’s Hospital in April, 1931 and resided in Duluth most of her life. She attended Ensign Elementary School, St. Clements Jr. High, Stanbrook Hall for high school and the College of St. Scholastica for her Bachelor’s Degree. In 1953, she was elected by the CSS faculty as “All College Woman”. She attended the Eastman School of Music at the University of Rochester, NY where she earned her Master’s Degree in Music Performance.

She devoted her entire life to the world of music, specifically piano and organ. She started taking piano lessons at age 4. In high school she entered many state piano competitions always taking first place. She gave public recitals during each of her years at CSS. During her senior year at Scholastica, she traveled with another pianist giving recitals to high school students on the Iron Range. She was the official pianist for the Duluth Symphony Orchestra from 1956 to1967 and appeared as a guest soloist in 1965. She was a member of Matinee Musicale from 1945 until the 1980’s and served as their president in the mid 1970’s. She supervised music competitions in Duluth and the Iron Range. She was an organist at various churches around Duluth starting in 1946, finally retiring in 2017, but continued to play when needed until 2019.  She was the music director at St. Joseph’s Catholic Church in Duluth Heights from 2003 until her retirement. She performed as a concert pianist in Minnesota, New York, and Michigan and was an accompanist to violinist James Smith.

In early 1967 she was awarded the Birdella Ross Scholarship of Minnesota Tau Chapter of Delta Kappa Gamma. She was given a year’s leave of absence from Stowe Jr. High to study advanced piano in Vienna, Austria.

Teaching was her second love. She taught in Avondale, Michigan, Morgan Park High School and Stowe Jr. High in Duluth, the University of Minnesota-Twin Cities, the College of St. Scholastica, and at the Lachmond School of Music in Duluth.

Barb was a Brownie Leader, Junior Girl Scout Leader and served as the Northeast District Chair of Operation Classroom for the United Methodist Church.

In 1967 she married the love of her life, Lional Coffin.  Together, they had a son and twin daughters and celebrated 35 years of marriage before Lional passed.  Their marriage included many adventures: gardening, building a house and traveling with their children.  The whole family sang together as a group at church services around Duluth.  Their devotion and focus to Jesus was a light for many and her faithfulness and trust in the Lord was strong until the end.

Barbara is preceded in death by her parents John and Leona; husband, Lional; sister, Jacqueline; and infant brother, Lyle Burton.

At Barb’s request, she will be cremated and interred in the family plot at Park Hill Cemetery next to Lional.

Barbara and her family ask that you please wear a mask if attending either event.

In lieu of flowers, please consider making a donation in Barbara’s name to Life House or the St. Scholastica Priory, both of Duluth, MN.

To send flowers to the family in memory of Barbara Coffin, please visit our flower store.