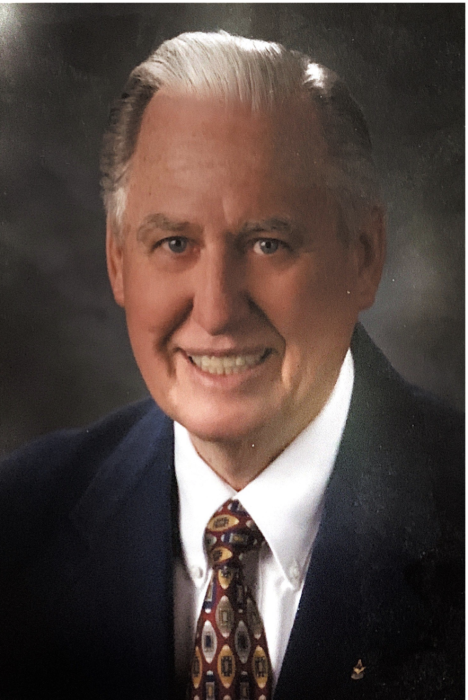 Maynard Jergen Eng , 86, passed away on October 21,2020.  He was born at his parents’ home in Duluth on December 16, 1933.  Maynard was the sixth of seven children born to Milton and Dora Eng.  He married Patricia Johnson Eng on June 30, 1953. He attended Duluth Public Schools graduating from Duluth Central High School in 1951 and the University of Minnesota – Duluth in 1958. He had a strong work ethic and a true example of hard work paying off.  Maynard was a proud champion of Duluth and enjoyed being active in his community.  He was an ambitious goal setter who creatively met obstacles with strength, determination, and dignity.  Maynard worked for Minnesota Power and Light before becoming a successful State Farm Insurance Agent for over 34years.  He won many state and national awards, receiving vacations he and Pat thoroughly enjoyed together. Maynard served as President of the local chapter of Life Underwriters and Legion of Honor for many years.  He was active with the Endion /University/Hope United Methodist Church for almost 70 years.   He was actively involved with the Boy Scouts of America, Troop 33, and was the recipient of the Silver Beaver Award for noteworthy service of exceptional character to youth and was a proud father and grandfather of Eagle Scouts.  Maynard was an active member of the Ionic Masonic Lodge No. 186, serving as Master of the Lodge twice and received the distinguished Hiram Award. This is the single highest honor a Master Mason may receive. It is the highest honor (other than being Master of the Lodge) that can be bestowed on a member of a Masonic Lodge.   He was also a 32nd degree Scottish Rite member and was a member of the AAD Shrine.

Preceding Maynard in death was his loving wife of65 years, Patricia, his parents Milton and Dora Eng, and four brothers, Milton, Hans, Harold, and Donald.  He is survived by: his sister Myrtle Peterson of Grand Rapids, MN and brother Clifford of Duluth, MN; six children, Steven (Judy) of Duluth, MN, Cynthia (Charles) of Shoreview, MN, Timothy (Pamela) of Eagan, MN, Andrew of Duluth, MN, Thomas (Jeanne) of Hermantown, MN, and Kristen Jeanetta, Duluth, MN; nine grandchildren and three great-grandchildren, as well as many nieces and nephews. He will be greatly missed by his family.  The family would like to thank his caregivers at Beehive Homes of Duluth, and Brookdale Memory Care of North Oaks, MN.

Visitation will be held Wednesday October 28th stating at 5pm with a Masonic service at 7pm in the Dougherty Funeral Home, where visitation will continue Thursday, October 29th from 10am to the 11am funeral service. Burial at Oneota Cemetery, Duluth, MN.  In lieu of flowers, memorials may be directed to Hope United Methodist Church or to the Alzheimer’s Association in Maynard’s name.  Arrangements by Dougherty Funeral Home, 600 E 2nd St. Duluth, MN, (218) 727-3555.

To send flowers to the family in memory of Maynard Eng, please visit our flower store.