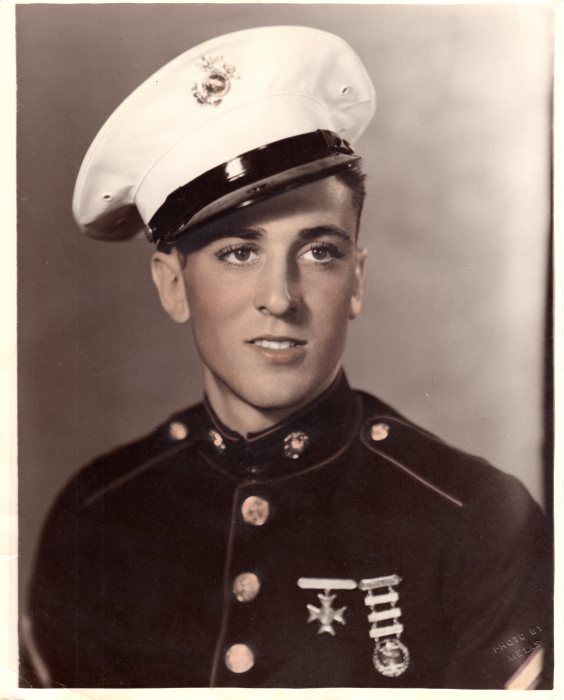 James Joseph Hubert was born in Duluth to Mary Harriet (Arseneau) and Wallace Leon Hubert on August 12, 1921. He had a sister Elizabeth who was 4 years younger. James attended school in Duluth (St. Michaels Elementary and Denfeld HS) and worked a variety of jobs. James enlisted in the United States Navy Reserve in September 1938. He was honorably discharged from the Navy Reserve in January 1940 and on that same day he enlisted in the United States Marine Corps. Following Basic Training, Pvt. Hubert James was assigned to Company H, 2nd Battalion, 8th Marines, 2nd Marine Division at Camp Elliot near San Diego, and remained with that unit during the remainder of his Marine Corps service. During his service James rose from the rank of Private to Private 1st Class to Corporal and then to Sergeant.  He also learned of the birth of another sister, Mary Katherine, in February 1941 whom he never met because he re-enlisted in the heat of war. Sgt Hubert’s unit took part in the Battle of Guadalcanal and then sent to lead the amphibious assault in the Battle of Tarawa. More than 1,000 Marines died in the 3-day battle and 5 times as many of the enemy perished as well. The exact circumstances of Sgt Hubert’s death are not known. Documentation lists him as Killed in Action (KIA) on November 21, 1943. His Casualty Card indicates that he died of a gunshot wound to the chest and was ‘buried in Division Cemetery’, of which there were several dozen on the island. His remains were not found in any of the known burial locations; several had gone missing with the passage of time. Following the War, all known remains were exhumed and re-interred in the National Memorial Cemetery of the Pacific (aka The Punchbowl). Because his remains were not found, Sgt Hubert was declared ‘non-recoverable’. His name was etched on one of the memorial walls in the Punchbowl dedicated to those who were still missing. Following the discovery of a fellow Marine’s remains in 2011 on Tarawa, History Flight, a non-government agency, searched for and located an unmarked burial trench. It was determined to be Cemetery #27 (The ‘Lost Cemetery). In July of 2015 History Flight turned over to the Defense POW/MIA Accounting Agency (DPAA) custody of 35 sets of Marine remains. In May of 2016, DPAA concluded that one of the sets was indeed those of Sgt. Hubert. Nearly 79 years after he started his military career, Marine Sgt James Joseph Hubert has finally returned home.

Memorials in James’ honor may be made to History Flight at: http//historyflight.com/nw/.  More information at: www.jamesjosephhubert.com .

To send flowers to the family in memory of James Hubert, please visit our flower store.