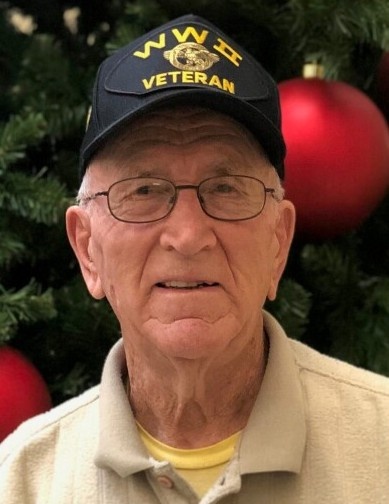 Charles (Chuck) Robert Ralph was born January 4, 1928, the son of Joseph Charles Ralph and Anna Rose (Wimmer) Ralph. He died peacefully in his sleep of natural causes on November 7, 2021, at the age of 93. He grew up on Springvale Road in the Piedmont Heights neighborhood of Duluth, MN. At a young age, he enlisted in the US Navy to serve our country in World War II. Chuck finished his schooling through the Navy, serving as a Seaman First Class. He was his ship’s fireman below deck, responsible for plumbing, welding, and waterworks. His time in the Navy was spent on the U.S.S. Pasadena and the U.S.S. Springfield, until his honorable discharge in 1947. Once he returned stateside, he took a train back to his large blended family in Duluth, MN. He worked for 40 years as a switchman on the Northern Pacific Railroad - now Burlington Northern. He met his wife Charlene Jean Hauch on a blind date – they were wed on July 19, 1950 by a justice of the peace in Virginia, MN. Married for almost 65 years, they lived and raised their four children on Park Point in Duluth, MN until Charlene’s passing in 2014. Chuck was quiet, liked to be on the go, and was the rudder of our family. He never missed a fishing opener or family gathering. He was a man who, without many words, kept his family anchored, safe, and gave his children the confidence to go out and build a life. We are all so lucky to have had him with us for over 93 years. He was also the proud owner of an enormous collection of clocks, which kept ticking as steadily as he did until the very end. Carry on in heaven Dad. He was preceded in death by his wife Charlene Jean Ralph, parents Joseph Charles and Anna Rose Ralph, wife Charlene Jean Ralph, brothers Edward Joseph, James Raymond, William Henry, Floyd Patrick, Joseph Charles, and Rodger Leroy Ralph, sisters Rose Haglund, Lucille Kruse, Grace Hamilton, and Mae Sadler, granddaughter April Mae Sundquist, and grandson Nathan Jon Sundquist. He is survived by his children Claudia Jo (Larry) Sundquist of Bemidji, MN, Colette Jean (Gary) Moe of Duluth, MN, Charles Jay (Cindy) Ralph of Clearwater, FL, and Cherri Jane (Steven) Wedan of Savage, MN; grandchildren Jamie (Tony) Popp, Stacie (Juan) Turcios, Calee Moe-Weecks, Carissa (Nathan) Caine, Brady (Megan) Moe, Charlie (Shauna) Ralph, Dwayne Ralph, Madison (Tyler) Van Cleave, Riley Wedan, and Robert Wedan; and great-grandchildren Caden, Bennett, and Nora Popp, Taylor, Tanner, and Harper Turcios, Cooper and Carter Caine, Maelyn Weecks, and Hunter East. Service Information: A Memorial Service will be held at 3:00 pm, with Visitation starting an hour earlier at 2:00 pm on Friday, November 26, 2021 at Dougherty Funeral Home, 600 East 2nd Street, Duluth, 218-727-3555.

To send flowers to the family in memory of Charles "Chuck" Ralph, please visit our flower store.